Over the last couple of years, I faced a Windows issue preventing me to delete directories or files with paths exceeding a certain size. Using the default Windows tools such as DEL, RMDIR, or Windows Explorer, resulted in errors The directory name ... is too long or The source file name(s) are larger than is supported by the file system. 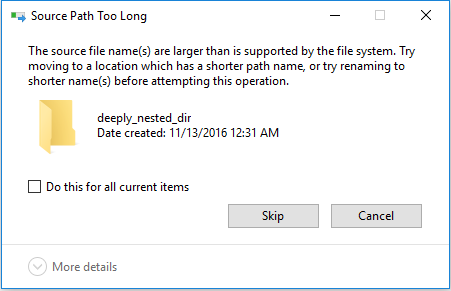 After some research, I noticed that a lot of people also encountered this problem. Various workarounds and tools are already available, but they did not work for me due to the depth of nested directories created on my Windows system. In this article I describe my findings and propose some solutions, including the convenient Winrmrf that I implemented.

The issue described above is related to the Windows Maximum Path Length Limitation. As documented in the Microsoft documentation, the Windows API has a limitation of 260 characters for file and directory paths (MAX_PATH). By default, any time a path exceeds this limit, the Windows API functions choke. This directly impacts the common tools we interface with on Windows, either in a command prompt (DEL, RMDIR) or via graphical user interface applications like Windows Explorer.

To specify an extended path, you need to use absolute paths and prefix them with \\?\. For example the extended path for a directory named deeply_nested_dirs in folder C:\Users\andre is:

Since Windows 10 version 1607 (Windows 10 Anniversary Update), the MAX_PATH limitations have been somehow removed, but it requires to modify a key in the registry. The following registry script updates the appropriate key:

Note: This does not solve the problem of being able to delete long path files or directories using the default Windows tools like DEL, RMDIR or Windows Explorer. But, changing the value of LongPathsEnabled from 0 to 1, enables the usage of the Windows API functions without having to prefix paths with \\?\.

With a little help from Python

On Windows, Python is using the Windows API functions. Therefore, armed with the knowledge of the \\?\ prefix as documented in [Maximum Path Length Limitation]((https://docs.microsoft.com/en-us/windows/win32/fileio/naming-a-file#maximum-path-length-limitation), it might be possible to overcome the MAX_PATH limit. Indeed, after some simple tests, I realized that shutil.rmtree() worked perfectly, provided that an absolute path prefixed with \\?\ was passed as argument. Below is an example of a complete Python script building an extended path, and invoking shutil.rmtree() to successfully delete a directory with a path exceeding 260 characters:

The following shows how to delete the directory deeply_nested_dirs with rmrf.py:

In order to test the different solutions explored to prepare this article, I also used the following script to create deeply nested directories resulting in paths longer than MAX_PATH:

Note: The Python code examples were tested with Python 3.5.2 on Windows 10.

If you are more leaning towards the Java ecosystem than Python, you may consider the following to delete files and directories the default Windows tools can't.

These examples are using Groovy, but any language targeting the JVM (Java Virtual Machine) would work.

Using [FileUtils.deleteQuitely] from the Apache Commons IO library and Groovy, you can delete directories (in this example deeply_nested_dirs) with the following script:

Save the code above in a file named rmrf.groovy and execute with:

The Groovy -e option does not require any dependency on external libraries, and is directly executed at the command line:

Note: The Groovy functions don't require the magic prefix \\?\ to prepend the path.

If you don't want to program your own solutions, but want something small and easy to use in order to delete stubborn directories, Winrmrf might be worth a try. Winrmrf, implemented in Nim, results in a small standalone executable that you can copy in a directory included in your Windows PATH. It does not have any other dependency like a Python or Groovy solutions would have (respectively Python runtime and JVM with Groovy library). It can be invoked at the command line:

Note: The source code of Winrmrf is available on Github. Binary versions are also available for download in the GitHub project releases. Winrmrf is released under the MIT License.

Other Solutions and Workarounds

Many creative workarounds and solutions are also available online. Although these solutions were not fully satisfying for my situation, some are worth checking out:

Microsoft Windows are either registered trademarks or trademarks of Microsoft Corporation in the United States and/or other countries.